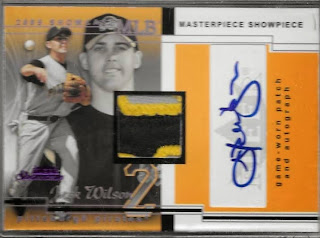 My collecting interests have grown over the years, and the number of boxes piling up around the apartment have grown with it.  But at root, I have always been and always will be a player collector.  My Jack Wilson additions are few and far between these days.  I'm sitting at over 70% of his total cards in existence, so most of the cards I need are either very obscure or low numbered.

And sometimes a card falls in both categories.

I don't know that I would call this one one of the top cards in my collection, but it's not far from it.

In case you were wondering, the big whale here is a 2005 Fleer Showcase Masterpiece Patch Auto 1/1.  Jack Wilson was slated to have quite a few autos and patch cards in 2005 Fleer products, but most were issued as redemptions that were never filled after the Fleer bankruptcy.  Just as important, Fleer's distribution was shaky in 2005 - the writing was clearly on the wall the company's days were numbered.  With a high number of redemptions, many shops in my area stopped carrying new Fleer product.  And once the company went under?  Box prices crashed, since many of the later releases contained redemption after redemption in place of actual hits.

Showcase was one of the later releases, and was a higher end product.  I would imagine quite a few big hits are still sitting in boxes these days from Fleer's final year in the hobby.

I don't know why it took so long for this beauty to find its way to ebay, but I'm glad it did.  The card ended for less than I paid for the non auto, patchless 1/1 from the set years ago.  Patch cards have lost a bit of their luster for me in the last few years, but I couldn't be happier to add this one.  I'm going to go party like it's 2005.
Posted by Mark at 5:36 PM