Sports team allegiances can be a tricky thing.  I grew up a huge Pitt fan.  My dad had tickets to Pitt football games through work, and he would take me to a couple games a year, typically against the weaker matchups that clients didn't want to go see.  But what did a 11 year old care if he was watching the Akron Zips?  My first real focus in collecting was Dan Marino.  It blew my pre-teen mind that the greatest quarterback in the game went to this school half an hour down the road from me.  I had it set in my mind that I would be heading to Pitt when it came time to pick a college.  I have a Marino collection of a few hundred cards, but sadly most of his cooler cards are outside my price range.  But I was able to snag this one for about $2. 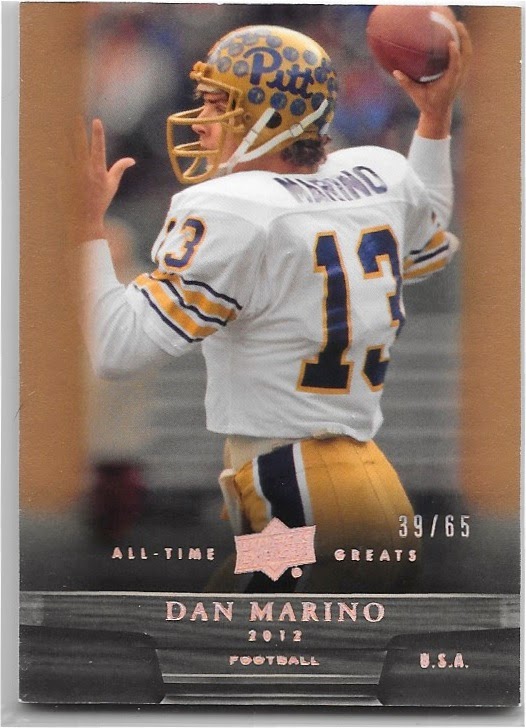 Apparently pre-teen me didn't understand too much about academics, and ultimately when better scholarship offers came around from more prestigious universities  it was still a tough decision to not go to Pitt.  But I still followed the football and basketball teams pretty closely, until I ended up in grad school at WVU.  Cue dramatic music. 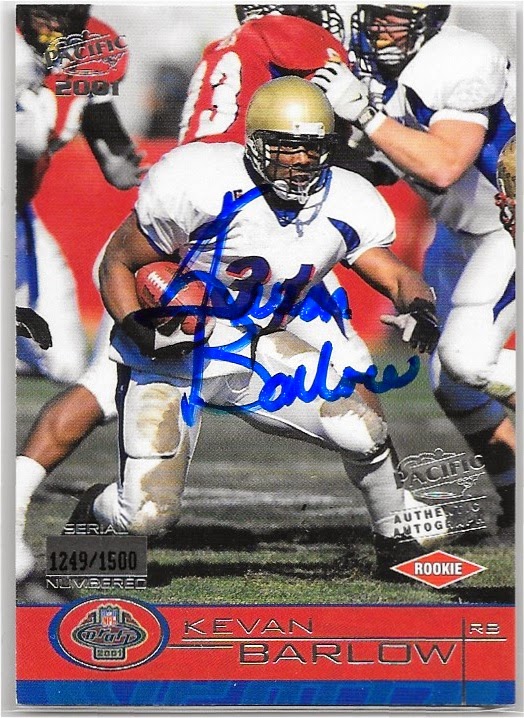 So now I collect both teams, but spread my focus between early 00's Pitt players and players from the 2010-12 teams while I was at WVU.  And while both teams have pretty strong followings, it's not hard to find cool cards on the cheap. 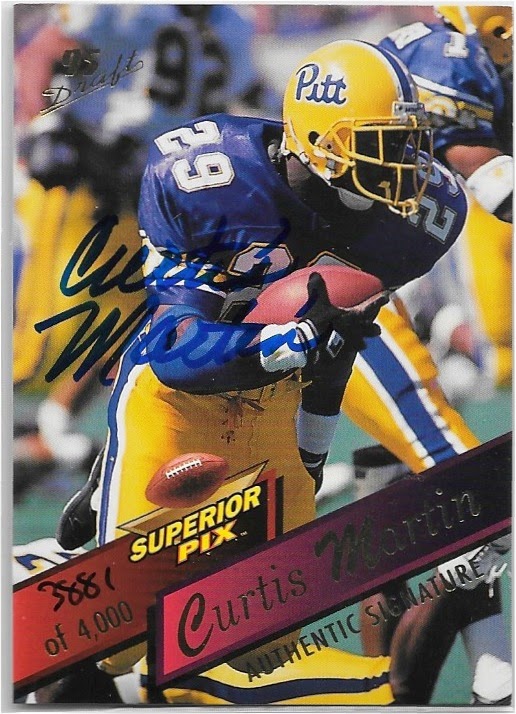 I have been after this Curtis Martin auto for quite some time.  I forgot to bid on a copy on ebay a few years back for $5.99, which seemed like a great price for a rookie auto of a Hall of Famer.  Then I found a few copies on COMC for around $5, an even better price, but didn't pull the trigger.  So I was pleasantly surprised to see a copy sitting on COMC for $4.25 at 3am on Black Friday right as the sale went live.  I couldn't click the purchase button fast enough. 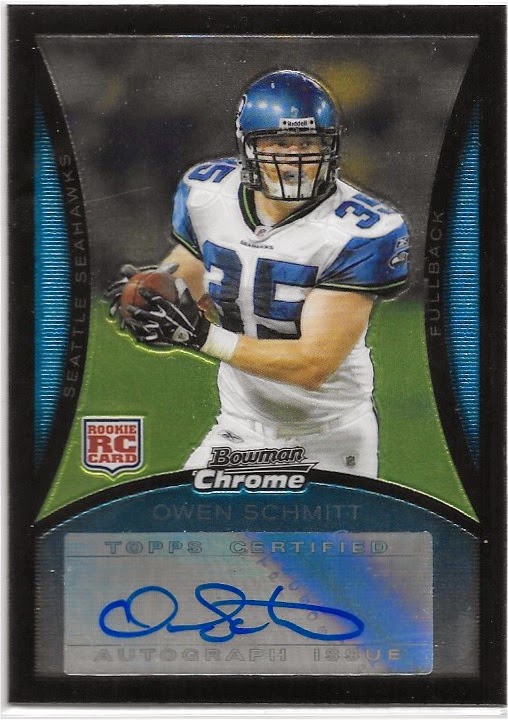 I mainly try to stick to cards of guys in their college uniforms.  But at just $.65, this auto of former WVU fullback Owen Schmitt was too cheap to pass on. 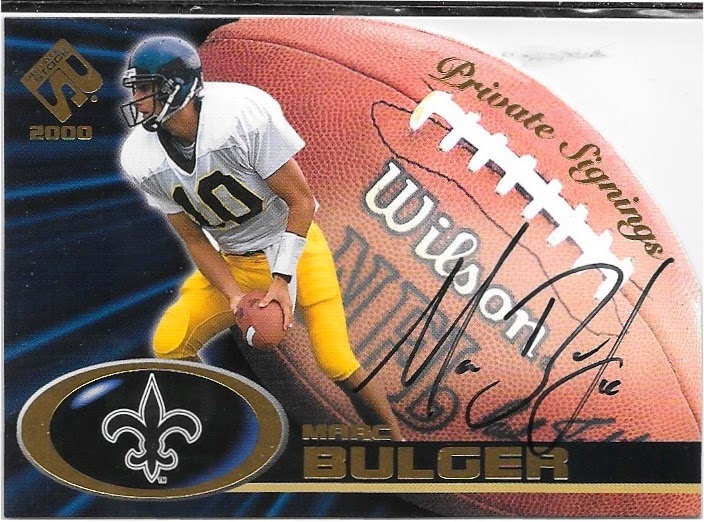 I know I've name dropped this a million times on the blog already, but I taught Geno Smith during his sophomore year at WVU.  He was a really nice kid, though some of his antics as a pro have me shaking my head.  I had planned on starting a player collection of him, but those plans went out the window pretty fast when the Jets selected him.  While it's been a bummer to see him struggle, it has finally brought his prices down to earth.  I'm hoping I can start to expand the collection during the offseason, and hopefully Geno can land with a different team that might be a better fit to allow him to develop. 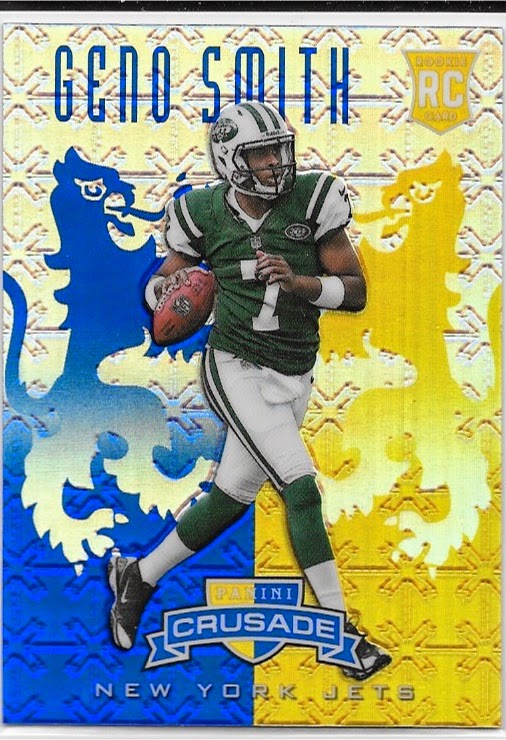 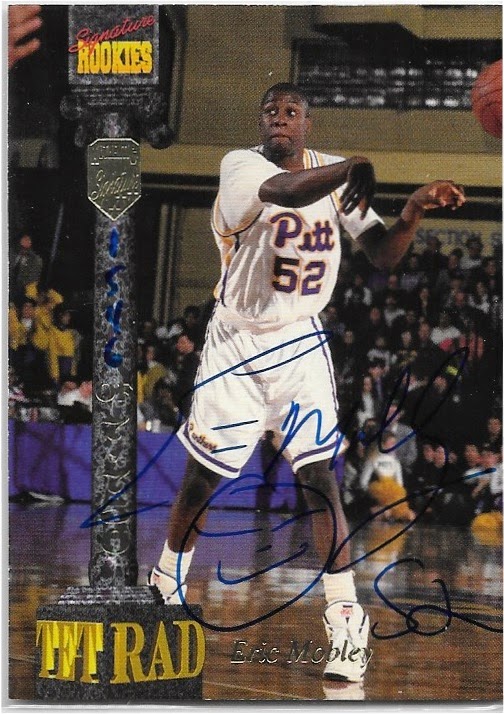