I'm a budget shopped.  It's just the way I am.  Aside from cards in my Jack Wilson collection, I rarely pay more than $5 for a card.  Sure, I have plenty of $5 cards, but I typically wait until I can snag one at a better price. 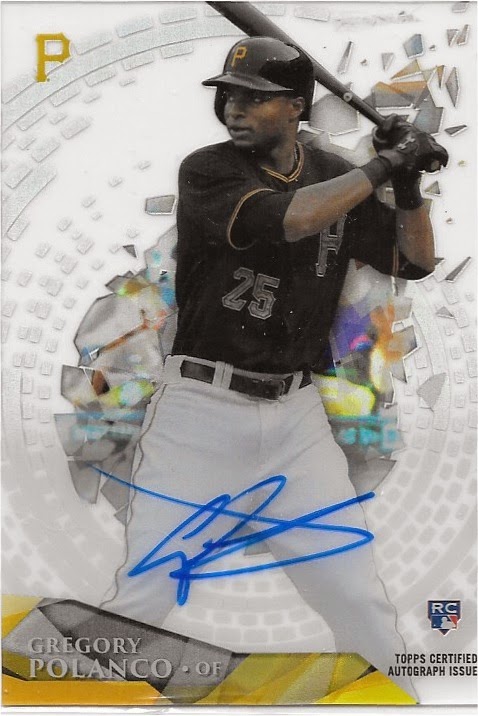 But the recently released Topps Tek set had me excited from the day the set was announced.  I had high hopes that even with a small-ish base set, we would still see a fair number of Pirates.  After all, when you have the reigning NL MVP, why wouldn't there be at least two or three cards in the set.

Oh, that's why.  It's Topps.  While Topps did manage to include Orlando Hernandez and Rafael Palmeiro in the set, they somehow overlooked the NL MVP, a recent number 1 overall draft pick, and just about everyone else that wears a gold P.  Maybe they really did want to go to extreme lengths to mirror the original Tek sets.  After all, the Pirates didn't really have many players worthy of inclusion in a short set in the late 90's.  But hell, even the '98 Tek set had 2 Pirates, with Aramis Ramirez and Jason Kendall both making the cut.

What Pirate fans did get was Gregory Polanco.  Not a bad consolation prize, assuming his career pans out.  But it also meant that any hopes I had of a mid-tier player like Pedro Alvarez or Starling Marte sneaking in that would allow me to pick up cards on the cheap went out the window.

But after my case of Topps resentment passed (or at least faded), I started hunting down the best prices possible for these cards, even if it meant stretching my self imposed spending rules a bit.  I landed this Polanco for $10 about a week and a half after the product went live.  It was right at what I was willing to pay, and was the lowest price for the card at the time, though a few have gone for a dollar or two less since then.

It's my first Polanco auto, so I'm happy to cross his name off my list, and even happier that I was able to do so with an auto from a fantastic looking product.  The cards don't scan great, but look very nice in person.  My only complaint is that the autos are on the same Spiral Brick pattern that is the most common base variation.  Unfortunately, it's also my least favorite of the designs in the set.  But hey, I guess with the way Topps put the product together I should be happy I got a Pirate at all.