COMC Haul - The Start of a New Project

I've been a team collector pretty much my whole collecting life.  But over the last couple years the number of new cards I really, truly want can be counted on a couple hands.  Most of the hit-centric products don't appeal to me, and I get sick of chasing 15 parallel versions of the same card.  So as 2014 winds down I've decided to tackle a few collecting projects from the days when I found cardboard to be a little more exciting.  After all, there are literally millions and millions of different cards that have been produced over the past few decades.  If the current stuff isn't doing it for me, let's find something that does.

Enter 1998 Donruss Signature Series.  Playing around with custom card designs over the last few months, I decided to take a crack at '98 Donruss Signature.  It looked relatively complex, but nothing too tough to tackle.   Boy was I wrong.  The design took me the better chunk of a week working on it here and there, making it far and away the longest of my custom projects.  But as I built and rebuilt each layer, I found I absolutely loved the design. 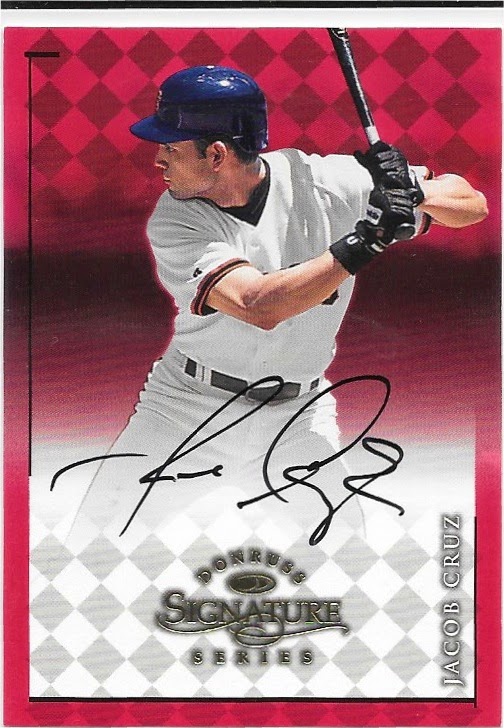 Reading Beckett somewhere around 1999 or 2000 I remember reading a multiple page feature about a collector who had completed the '98 Signature Series autograph set.  I mean the whole set, parallels, the Signature Preview cards.  The whole deal.  And then a multiple page spread showing each and every card from the set.  I didn't own a single autograph card, and still wouldn't for a couple years.  Something about it stuck with me, I guess. 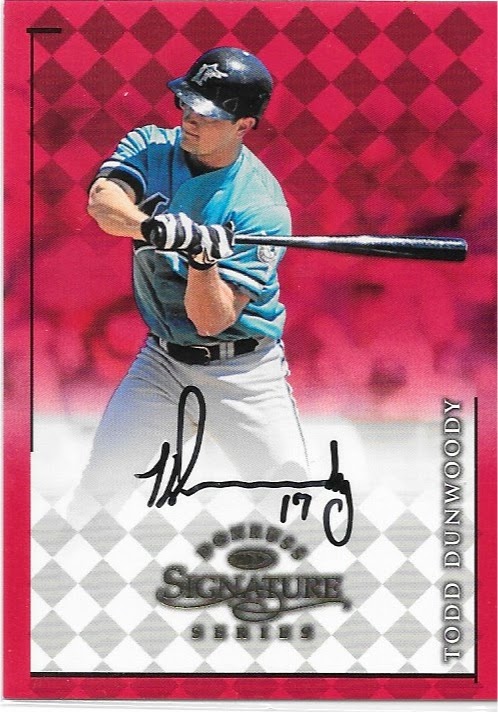 When I started thinking about doing an autographed set, the Donruss/Leaf Signature sets immediately came to mind (along with SP Chiography and Skybox Autographics).  After all, I've been picking up a bunch of autographs from 90's players recently - why not get them all in the same set?  The '96 Leaf Signature checklist is just too large for me to tackle, with too many players I can't even remember.  The '97 set has more star power, which also means more cost.  But '98?  The base red autographs only have 99 cards, and only two of those - super short prints of Greg Maddux and David Cone are definitely out of reach. 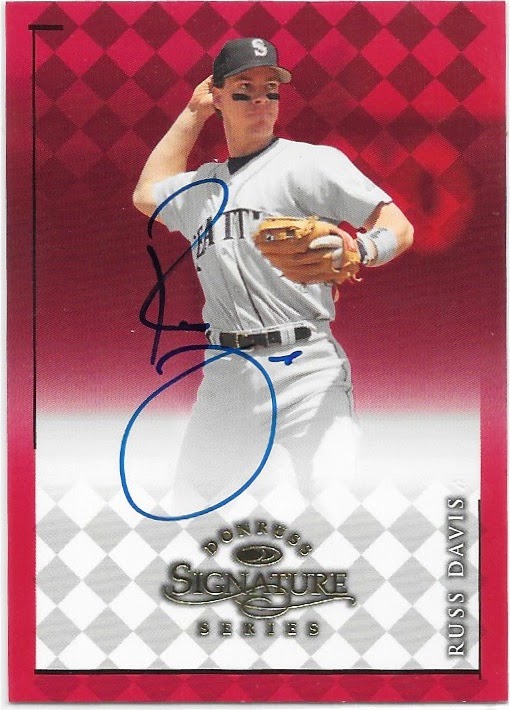 And COMC's Black Friday sales were the perfect way to make a dent in my needs.  Of the three cards above, the most I paid was $.85 for the Jacob Cruz.  I had my eye on a few others, but my timing for starting the set was fantastic.  A large lot of 44 1998 Signature autos was ending the day after I decided to start the set, and I landed it for just about $1/card.  I'll show those off down the road.

If anyone has any 1998 Donruss Signature autographs, or any of the parallel versions available for trade, let me know.  For now I'm planning on just doing the red set, but may start picking up anything I can in case I decide to go nuts.  Or win the lottery.