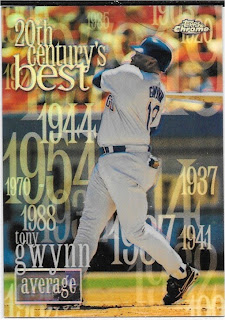 I mentioned the other day that I'm going to work on building the 2000 Topps Chrome refractor set.  It'll be the first set I've build since 2003 Donruss Team Heroes, to give you some idea of how well versed of a set builder I am.  It's going to be a longterm project, to say the least.

But I have about a dozen cards already, and will be looking to add more during COMC's Black Friday sales.  And there's no better way to kick this set off than with one of the cooler cards in the base set.  The 20th Century's Best subset was one of the more unique inclusions in recent Topps sets.  Sure beats the All-Star parade in Update, right?

The concept was that the cards would feature active leaders in major categories as the 20th Century came to a close.  And with a .339 average, Mr. Padre was a full 11 percentage points ahead of second place Wade Boggs.

I honestly didn't appreciate Gwynn enough during his playing days (or afterwards).  He was in the limelight of his career as I started following baseball in the mid 90's, and in the smash and bash era I didn't appreciate a guy who was just an amazingly pure hitter.

But daaaamn this card looks nice in person.  I'll try to get caught up with where my set currently stands over the next few days, and then hopefully some new additions will start rolling in later this month.
Posted by Mark at 4:54 PM