Digging into the Archives

I'm a pretty quirky collector, and I'll be the first to admit it.

I love a good photograph.  Or a fun card design.  And basically anything released between 1997-2002.  So most of the things I show off on the blog fall into that category.

It isn't that I don't appreciate the excitement or rarity of the quintuple patch refractor autograph printing plate numbered out of some sub-1 fraction.  I do.  It's just that my wallet doesn't really enjoy dropping the $60 it would take to own that card.

And my fingers don't really like writing about those cards.  At least not as much as the aforementioned categories.

But I have I have a lot of Pirate cards.  10,532 different ones to be exact.  Though I'm habitually behind on keeping my excel files up to date.

So there are a lot of those fun numbered cards.  And autographs.  And everything else.  Especially vintage cards, where my want lists have shrunk to pretty much just hi-number and Clemente cards for most of the post-war years.

Yet somehow those cards don't seem to make it to the blog nearly as much as they should.

It's not that I don't love them. 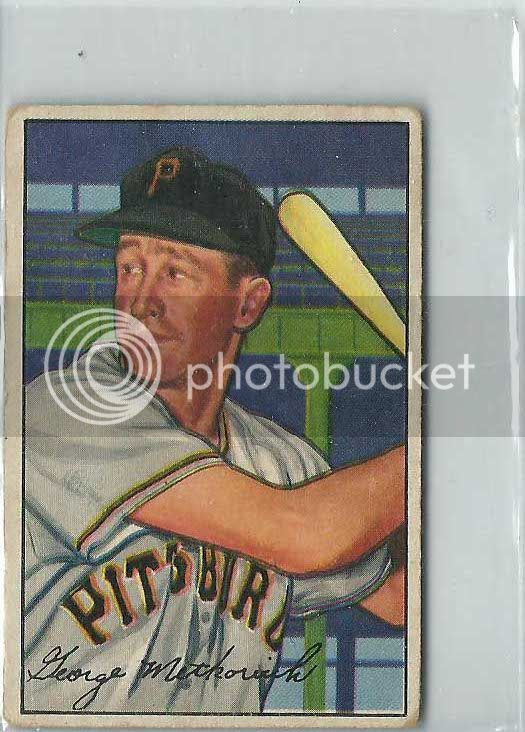 Vintage cards are among my favorite pickups.  Yet they just don't always feel blog worthy to me.  Vintage collectors are one of the biggest segments of the hobby, so maybe it seems counter-intuitive that I don't blog about them very often.  After all, give the people what they want, Mark.

But that's just it.  There is so much out there about those cards.  Google 1952 Bowman George Metkovich and you'll see row after row after row of images from his 52 Topps and Bowman cards.  Any grade, any photo resolution you could want, it's there for your viewing pleasure.

And you should.  Metkovich was a serious contender for the 1952 MVP, finishing 38th in voting.  He tore the cover off the ball at a torrid .271/.335/.391 pace.  The king of clout smashed a Ruthian 7 homers in 415 at bats.  By those standards Jose Tabata may be in line for an All-Star appearance next year, not a trip to the waiver wire.

But I'm a sucker for good nicknames, and good ethnic names.  And Catfish Metkovich meets those criteria.  He has earned his google stardom in my eyes.

Meanwhile google Kevin Polcovich 1997.  The image results spit back a handful of cards, and a few low res images that have probably been floating around the net longer than your angelfire page.  Awesome name.  Interesting player.  But no google love.

And that's why we're here.  Or at least I am.  You may have simply been misdirected to this page while searching for some Hungarian noodle recipe.  I love giving some hobby love to the guys whose card will never sell for $5, let alone $500, no matter what grade it is in.  Because baseball cards aren't just about the player on the front to me.  There is so much going on, so much to enjoy, that each card deserves its own appreciation.

But I guess the more I think about it, that 52 Bowman is a damn sweet card.  And compared to the 52 Topps set, Catfish really could use some more hobby love.