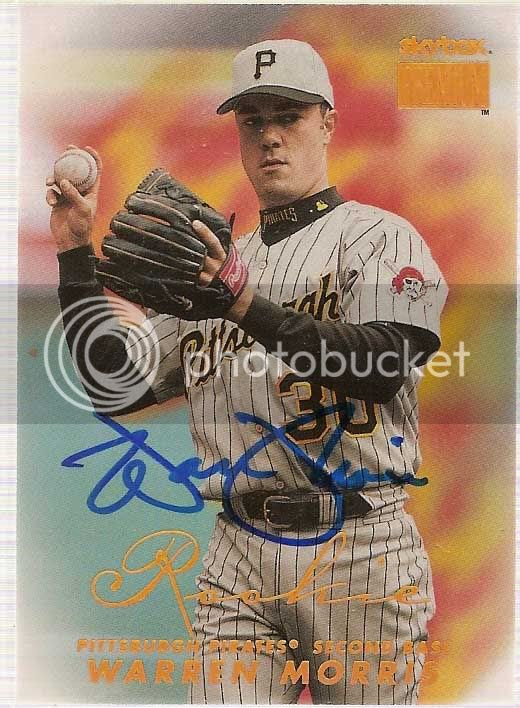 The Bucs turned back into a pumpkin tonight against Andrew Cashner.  They looked lost at the plate, wasting a strong outing by A.J. Burnett.  Sometimes 2009 doesn't feel all that far away.

Anyhow, back to our main event.  We're getting into the good stuff.  Or bad stuff, depending on perspective.

Morris was a shooting star, rising quickly from College World Series hero to a very strong rookie campaign in 99, finishing 3rd in ROY voting.  From there, his average and power numbers fell off significantly.  He is one of my favorite players, and a super nice guy.  My dad took me to a free signing he was doing at a local card show back in 2000.  It was the first time I had met a pro athlete, and he couldn't have been any nicer.
It was a shame that his career tailed off so quickly, but for a while he made things fun.

Redman again falls into the shooting star category.  He got cups of coffee in '00 and '01 before delivering a blistering .330 average in 56 games in '03.  But it was all downhill from there.  He put up a solid .280 average in his first full season, but his lack of on base skills and power made it clear he too would not be the answer in center.

I'll remember Redman most for his absolutely terrible routes to flyballs.  He would manage to cover more ground on a routine fly than anyone I've ever seen, breaking back before realizing it was a shallow fly in front of him.  Or vice versa.  Those years were a comedy of errors, and he was bringing the house down. 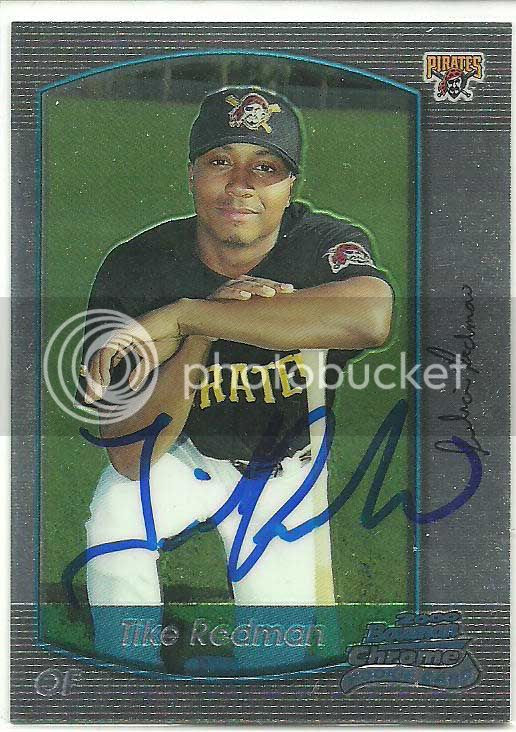 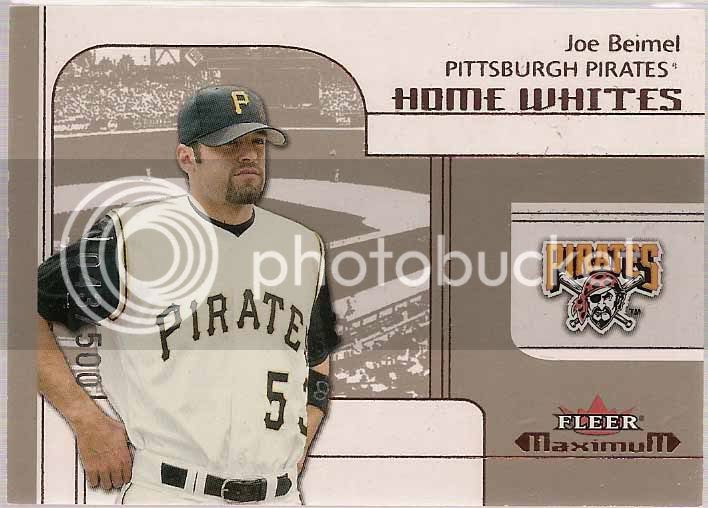 The pride of St. Marys, PA, Joe has a special place in my collection.  He graduated from my alma mater, Duquesne, before being drafted by the Bucs (and will be the last Duquesne alum to reach the majors, since they cut their baseball program in 2009).  He pretty quickly made the jump from school just a 15 minute walk from PNC Park to the actual field.

He made a nice career for himself as a lefty reliever, but unfortunately most of that came after leaving the Pirates.

Honestly, The Joker could have made the list twice.  He was a fan favorite during his two stints in Pittsburgh, but was a very different player on two very different teams each time he was here.

He came to Pittsburgh from KC in the Jay Bell/Jeff King Rebuilding Take I trade, and had a very good season for the '97 freak show team.  So the logical thing to do would be to leave him unprotected in the Expansion Draft, right? 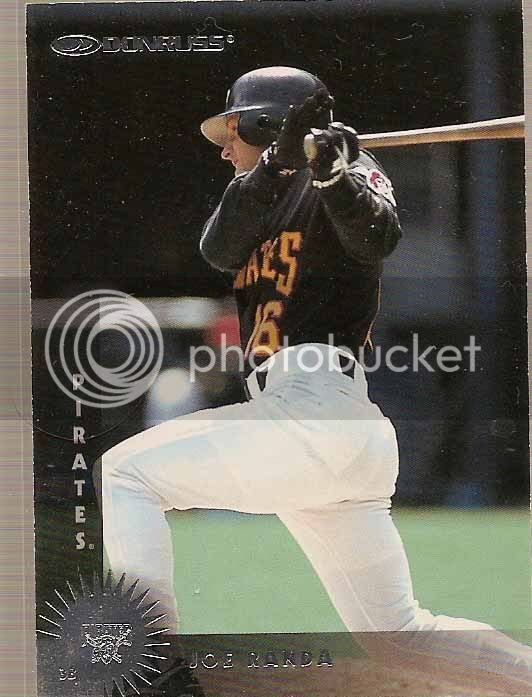 So there went The Joker, off to have a very productive career for the next decade.

Enter the free agent spend-a-palooza that was the 2005 offseason.  Randa, Jeromy Burnitz, and Sean Casey teamed up to form the 2002 Pittsburgh Beer League All-Star team.  Randa started the season as the starting third sacker, despite blocking promising youngsters Freddy Sanchez and Jose Bautista.

Randa left the team to go on the bereavement list, Sanchez filled in, and absolutely tore the cover off the ball.  Joe never got his starting job back, while Freddie went on to win the batting title. 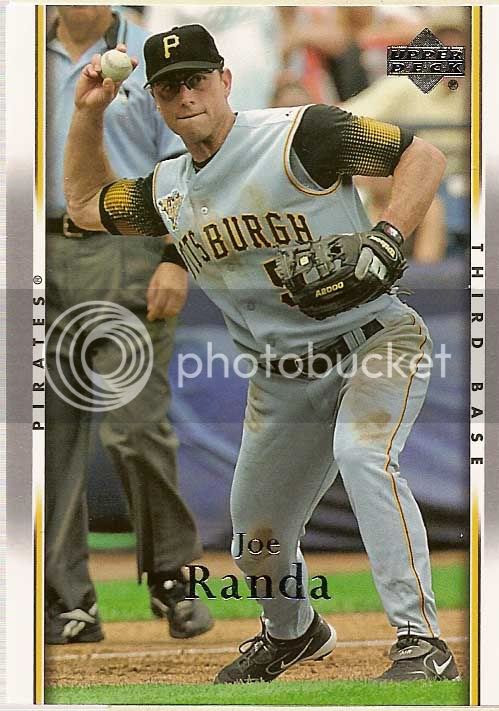 He worked at the position in spring training in hopes of making the squad, and would make 30 starts at the hot corner in black and gold.  And he made some pretty nifty plays while doing so.

But the highlight of Dirty Doug's time in the Burgh was a screaming match with Randy Johnson where the two players had to be separated.  To say the Pirate teams of the late 00's lacked fight would be a grand understatement.  The teams were akin to a kid who would just roll up in a ball and take a beating.  Not simply not fight back.  But in fact just sit there and take the licking. 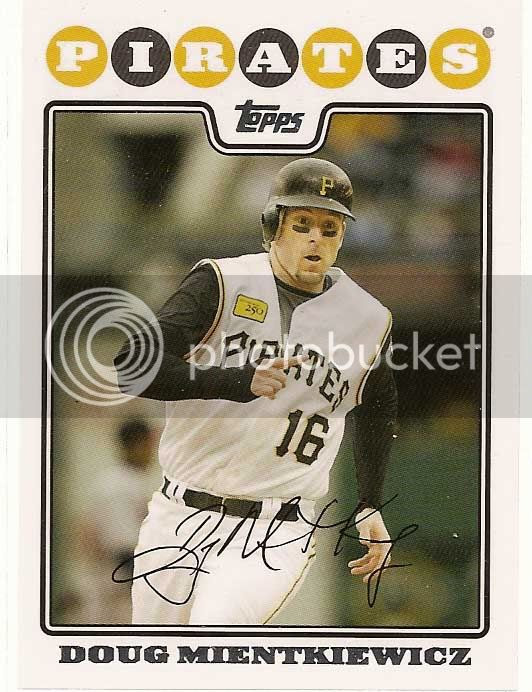 Doug brought fight and spirit to a team that had previously had none.  I was never a real believer in the whole "clubhouse leader" or "veteran leadership" argument.  Watching Mientkiewicz on that team changed my mind.

Simply put, it was awesome.