I think I may have finally found a new favorite autograph in my collection.

The Pirates have a "guest bartender" during Friday home games.  This basically consists of a former player sitting at a bar area signing autographs for an hour or two.  It's always great to meet Pirate legends, though most of the attendees are the same group of players that live in the area.

But occasionally you get a fun surprise.  Like this past weekend, when ex-Red Pirate Sean Casey was signing.  Casey is a Pittsburgh guy, and though he spent most of his career in Ohio, he made it back to the Steel City in '06, before a mid-season trade to Detroit.

The Bucs were playing the Reds, so it was a fitting guest, and sadly there were more Reds fans in the very short autograph line than there were Pirate fans.  The recent bandwagon jump-ons aren't particularly well versed in franchise history.

The line was only 5 or 6 people deep, and when I got to the front of the line Sean was all smiles.  I handed him my 8x10, and mentioned that I had been holding onto it since he attended Piratefest right after he signed with the Bucs prior to the 2006 season.

Sean was only signing on Friday of the 3 day event, back when Piratefest was still held in early January.  I had been in his autograph line, which was promptly cut off two people in front of me.  At the time, I was crushed.  Casey was the latest, greatest great 1B savior to come to the team, and by far the best track record of any player on the club.

As I told Sean the story - a far more brief version - he laughed and said I should have just grabbed him.  He was super friendly, and lived up to all the great things I've heard about him over the years.  As he was signing, I noticed him adding something extra.  But I was caught up in the moment, and didn't really give it a second thought until we were in the ballpark and I was putting away the signed cards and 8x10. 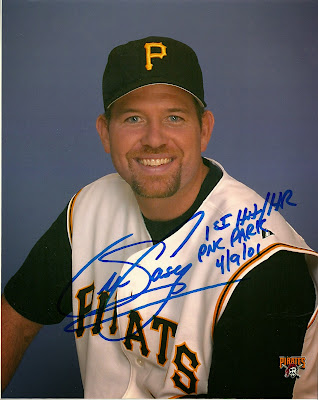 And then I took a look at the photo.


Sean hit the first homer at PNC Park in 2001 during the opening series against the Reds.  Obviously he wasn't playing for the Bucs at the time, but if a non-Pirate player had to hit the first homer in the park, I couldn't think of a better guy.  And the photo goes perfectly with my inscribed John Wehner photo of the last HR hit in Three Rivers.


The game inside didn't go so well.  But until the blown save in the 9th, I had a grin on my face from my experience with Sean during the entire game.
Posted by Mark at 9:30 PM