Aside from my team collections, the other main focus of my collection is autographs.  I usually just stick to TTM autographs.  But quite a few players, especially current ones, don't sign very frequently through the mail.  So when something falls into my price range, it's always nice to add some certified autos to the collection.

All the cards below came from my buddy Mike at Tromp's Sportscards.  They pretty much all fall into the "impulse purchase" category, but are some interesting additions to the collection. 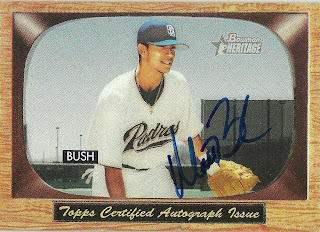 Matt Bush may be the biggest #1 overall draft bust in any major sport.  Ever.  I absolutely love the design of 2004 Bowman Heritage autos, so for a mere $1 it seemed like a must add to the collection.  What can I say?  Being a Pirates fan gives you a certain affinity for failed prospects.  Even if they are felons. 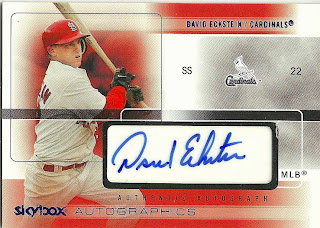 Eckstein was a scrappy player who was just flat out fun to watch.  I would have preferred to have his auto in an Angels uni, but he had a couple nice seasons in St. Louis.  Again, for a couple bucks it's a fun addition to the collection, and a very nicely designed card. 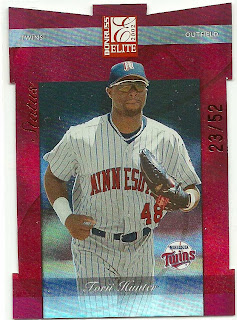 Alright, we finally have some trade bait at Battlin' Bucs.  I picked up an Elite Status of Jason Kendall for myself.  But this beauty was too nice to leave behind.  Are there any Twins fans out there?  This (along with a ton of other Twinkies stuff) is up for grabs, if anybody is interested. 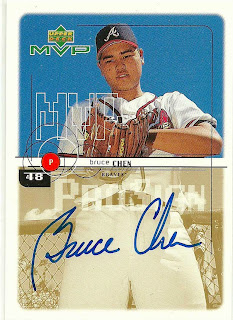 And closing out the fun, the ageless wonder, Mr. Bruce Chen.  If any newer collectors need some perspective on how fickle the prospect game is, Chen made the BA Top 100 3 times, clocking in as the #4 prospect in the game in 1999.  Yes, you read that right.  Fourth best prospect.  In the game of baseball.  Bruce Chen.

Since reaching the bigs at 21, Chen has gone on to have a surprisingly lengthy major league career.  In the early 2000's, it looked like he was bound to be out of baseball within a few years.  Obviously his performance in Kansas City is a far cry from #4 prospect status, and he certainly didn't live up to the billing of joining Atlanta's killer rotation in the late 90's.  But 1999 UD MVP Pro Signs are one of my favorite 90's auto designs.  I busted a ton those packs (or what seemed like a ton at 12) back in the day, but never came close to hitting an auto.  For a dollar, now I have one.
Posted by Mark at 9:27 PM