When I last left off, the first box of Steelers cards had yielded some unexpected finds.  It wasn't my first rodeo, so I knew not to have similar expectations for the Pirate box.  I am convinced one of the scientific laws of the universe is that exceptional box digs shall not yield Pirate finds equal to or greater than the quality of other teams' cards in said box.

Sadly the law held true.  But I saw still able to come away with a nice pile of Pirate cards that filled some holes.  As an added bonus, all the cards were in what looked to be relatively new toploaders.  Those things cost more than $.10 a piece themselves nowadays, don't they?

On to the finds!

Todays post was brought to you by Chromium technology. 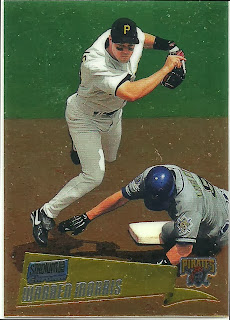 The box yielded an impressive number of Chrome cards, including almost complete sets of 2001 and 2002 Topps Chrome.  I think I had a total of 3 cards from those two sets, so it was a nice find.  Better yet, the cards all appeared to be in almost flawless shape without any surface scratches or major wear.  Anybody who has handled Chrome cards knows how sensitive they are to surface scratches, and I've noticed very few Chrome dimebox cards come with the courtesy of a penny sleeve. 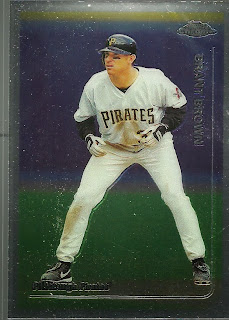 And while the fun insert finds were scaled back quite a bit in the Pirate box (the law, dammit), I did manage to pick up a card off my Most Wanted list. 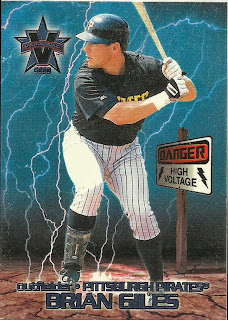 2000 Vanguard was one of those sets that just felt like they were reserved for the hobby heavyweights, and these High Voltage cards took the cake.  Just look at it - it's electric (boogie woogie woogie).  I'll gladly excuse the horrid spring training uni on Giles and just appreciate the sheer design insanity.  Amusingly enough I have a few numbered parallel versions of this card, but up until now the base version had escaped me.

Speaking of cool Pacific designs, they sure did have a way of making cards look unique. 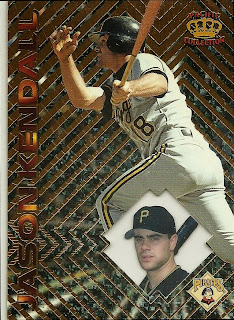 It's been nice to see acetate making a small comeback in the hobby.  On a base card?  Pure gold.

And of course the day wouldn't be done without finishing off a few set holes. 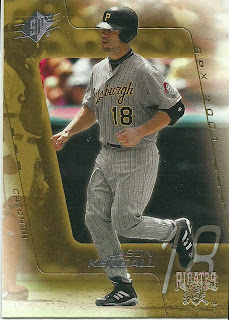 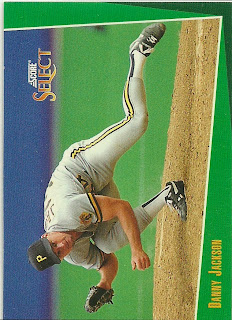 It's always amazing that after probably half a dozen large Pirate lot purchases of at least 1,000 cards each that I still don't have what might seem like the most simple of base cards.  See my almost entirely barren binder pages of '83 Donruss for example.  But that only proves another hobby law: the easiest to find cards are the hardest to come across.

Speaking of which, after my dime box work and a total of $2 in purchases I headed back to the indoors part of the flea market and presumably to my car to head down to Game 4 of the NLDS.  But I made a detour to one of the card dealers set up inside whose booth had looked incredibly unimpressive on my last trip.

And this time, the hobby law was wrong.  But we'll save that for part 3.