The New Centerpiece to My Pens Collection

Hockey isn't my number one collecting priority.  Heck, it's not number two or three either.  But I've  m 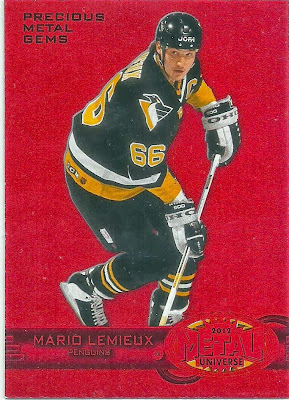 ade an effort over the past year or two to try to watch some more hockey, and my Penguins collection has slowly chugged along from a couple dozen cards to about 300 now.  It still lags behind my Pirates and Steelers collection by thousands of cards.

So centerpiece is a word I use loosely, considering there aren't many cards in the running.  I think it's supplanted a Johan Hedberg as my favorite Pens card.  And the Moose wasn't exactly stiff competition.

But this card?  It's a beauty.

Anybody who was collecting in the 90's knows the mystique of Fleer's Metal releases, and specifically the Precious Metal Gems.

Actual Precious Metals have been well out of my price range when they do come up.  But Upper Deck was kind enough to revitalize some of the 90's designs with their Fleer Retro product last year.  And with it came some precious cards.  Pun intended.

I had been on the prowl for either of the Pitt Panthers in the football release - Dan Marino and Tony Dorsett.  But both had been a little higher than I wanted to go.  I figured the hockey side was simply out of the question, with Crosby, Malkin, and Lemieux being among the most collectible players there are.

But it never hurts to look.  Much to my surprise, I came across this Precious Metal without any bids a day or two before the auction was set to end.

When it was all said and done this beauty arrived at my doorstep for a little under $10.  It's more than I would have ever expected to spend on a hockey card, but I'm glad I did.  The card looks amazing in person, and I think the scan does it justice.  Now if only the Pens looked a little better on a red backdrop.

Email ThisBlogThis!Share to TwitterShare to FacebookShare to Pinterest
Labels: I love the 90's, Penguins