Kate and I decided to take a day off on Friday and head to Ohio for a little flea market shopping.  We've both been pretty stressed lately, and the bitter cold winter hasn't helped.  The snow is finally melting and the weather was supposed to be touching 50 on Friday, so we figured this would be the first good weekend for flea markets around here.  After making the hour plus drive along back country highways to the middle of nowhere Ohio, we arrived at Rogers flea market.  During the summer, this is the biggest flea market anywhere nearby.  But as we pulled up and noticed the parking areas where we typically have to park were all fenced off, it didn't seem like a good sign.  The weather was nice, but the turnout looked pretty small.  There were two rows of vendors, plus a few indoor areas.  But it was a far cry from the hundreds of vendors you'll walk past at the height of summer.

But hey, we had already driven all that way and just the chance to walk around, get some fresh air, and enjoy some quality time together seemed good enough.  But my expectations were admittedly low.

Boy was I wrong. 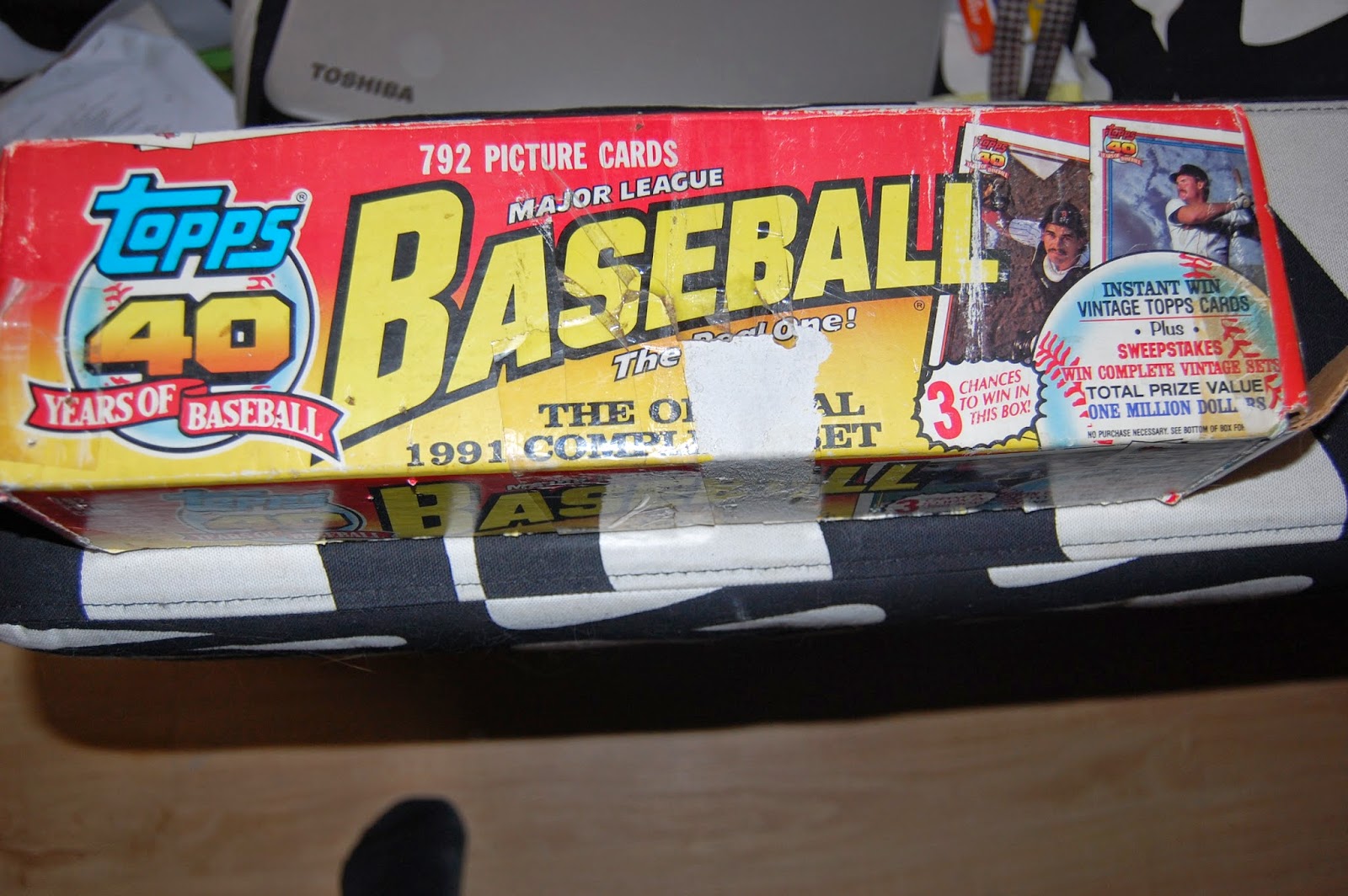 The first few vendors were the usual assortment of rusty tools or cleaning products.  But along with a sparse table of rusty something or others, I noticed a box of cards.  I nearly jumped for joy when I saw it was a complete set of '91 Topps.  Or at least the box for it.  I forgot to actually check what was inside the box before asking a price.  The guy said $10, but I talked him down to $5 without much of a fight.  Better yet, the set looked complete, and nearly untouched.  Though somebody did move the Pirates team set and Nolan Ryan cards to the front of the box. 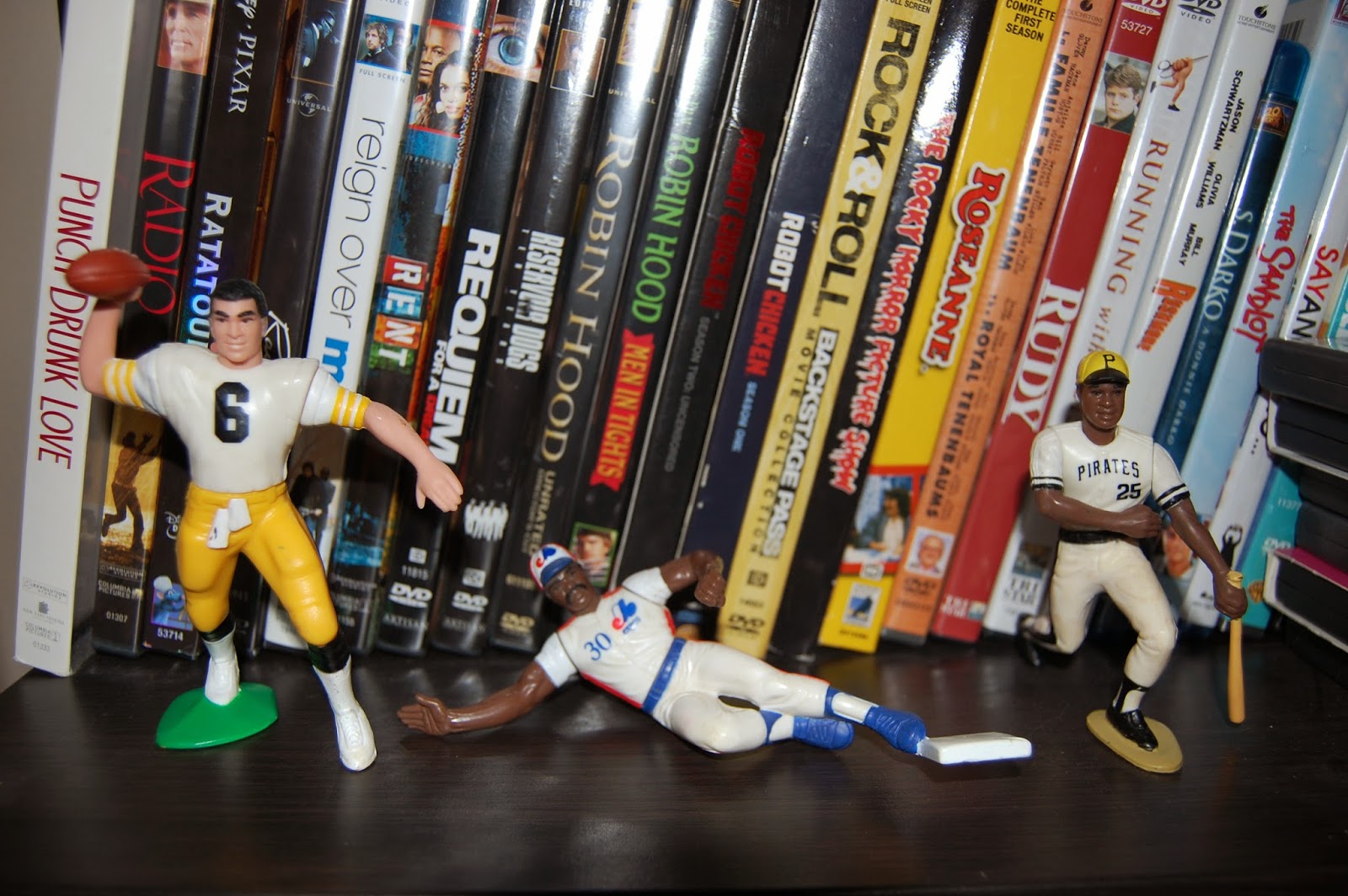 I came across a guy with boxes full of what can best be described as junk.  I usually give these guys a quick glance over and move on, but Kate loves digging through the crap to find something.  So while she was lifting up piles of stuff and digging though boxes, I spotted a few Starting Lineup figures.  The Bubby Brister is missing his helmet, and I already have a copy of the 1988 Bobby Bonilla, though this copy is in a little better shape.  For $1 each, I couldn't pass up on the really cool Tim Raines sliding pose and awesome Expos uniform. 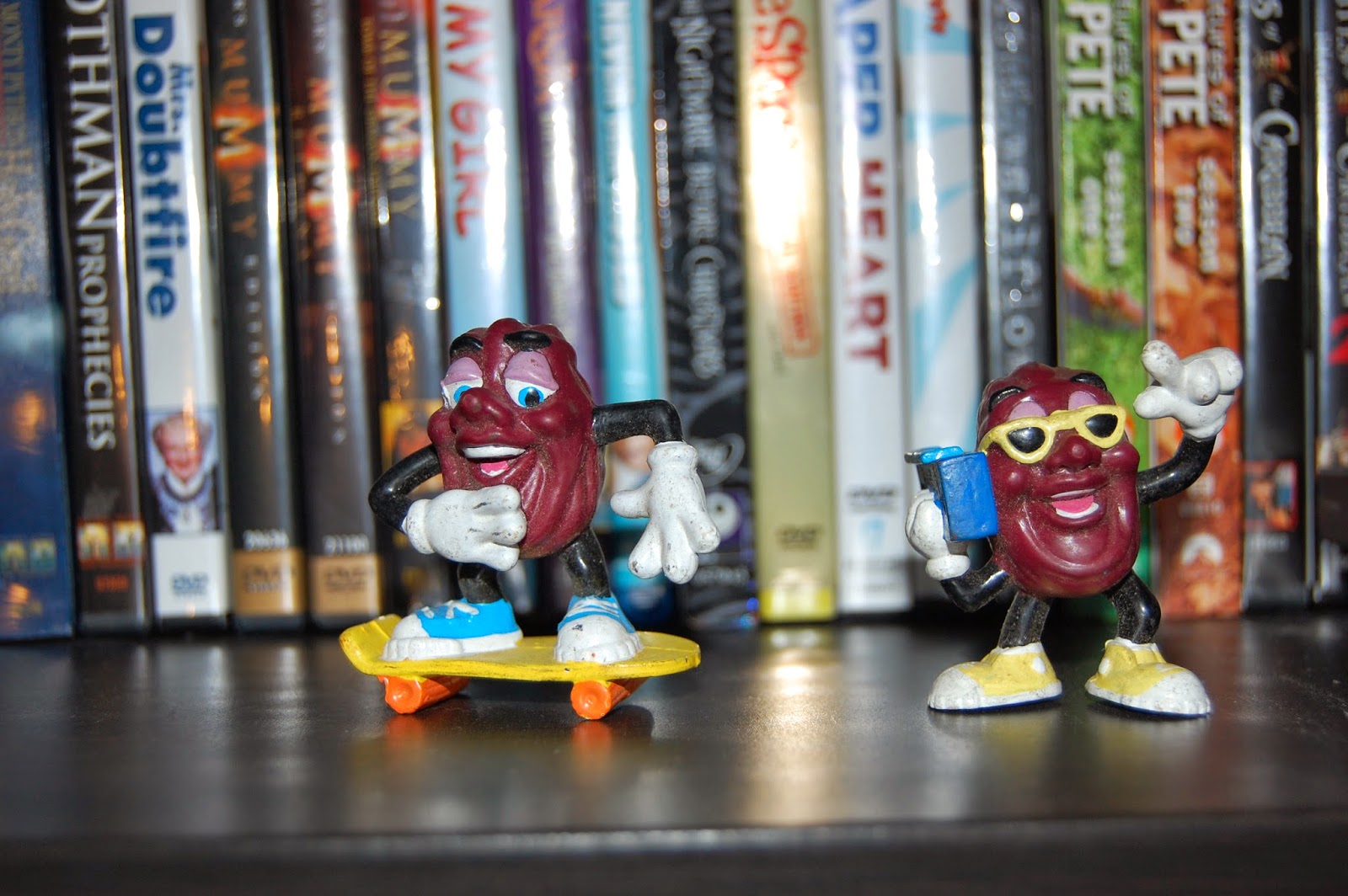 Kate also came up with a few things, including these California Raisin figures.  We found a bag of 10 or so of them for a couple bucks at a flea market last year, so she has been hell-bent on adding any she didn't have.

She also collects vintage postcards, and found a pile of 4 or 5 neat ones. 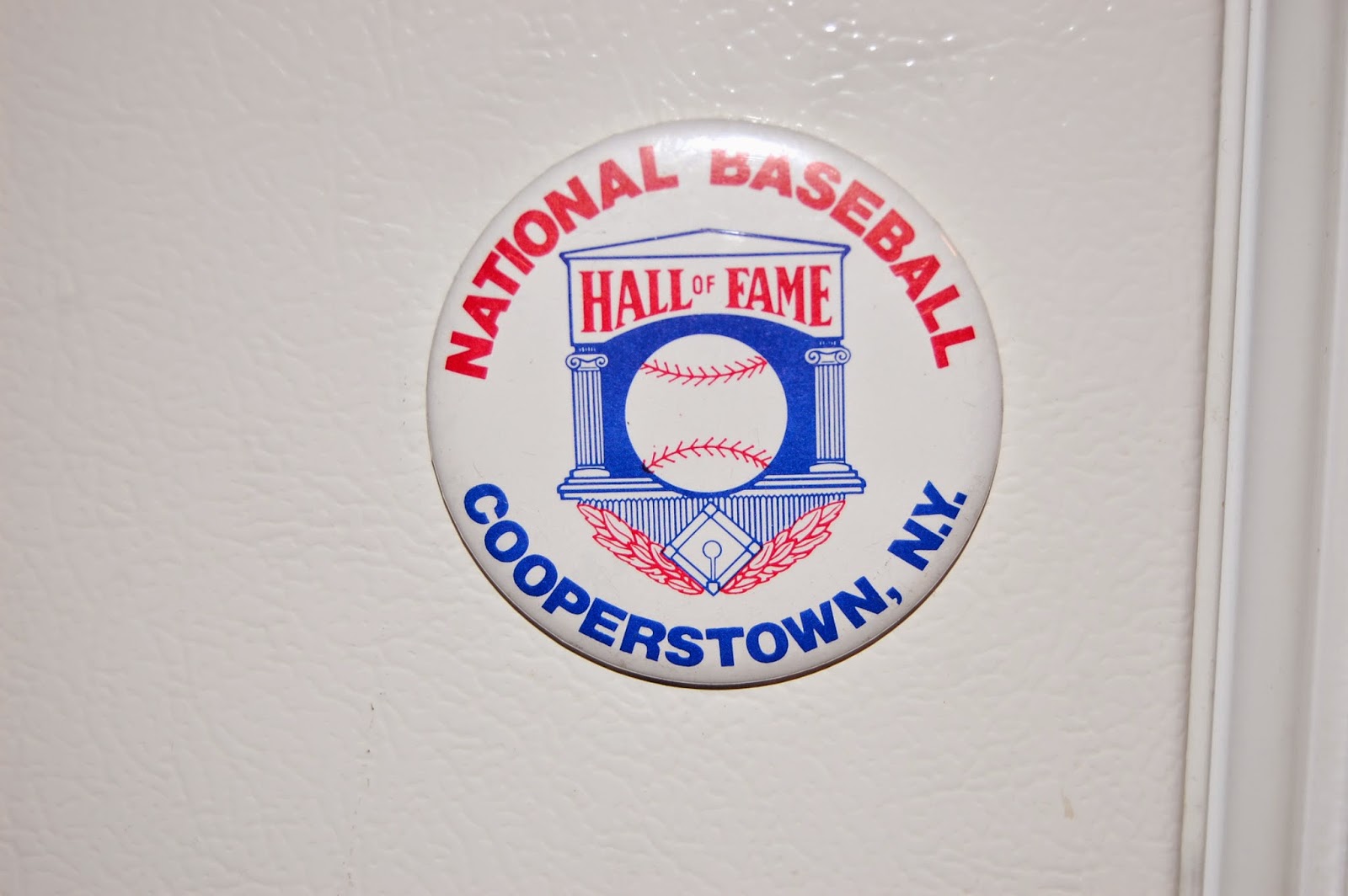 And I guess all that digging through boxes paid off, because she also found this cool (and possibly vintage looking?) Hall of Fame magnet.

I handed Kate the pile, and she went to pay.  She has me beat in the sex appeal category, especially when it comes to dealing with skeezy old men.  She offered $7 for the pile.  The guy quickly grumbled, "No, no.  I can't do that."  He then proceeded to count everything up and say, "$10...how about $7?"

Kate and I exchanged a puzzled look before forking out the money.  Whatever makes him happy.  He also had an entire box of 80's Topps and Donruss boxes with the box bottom cards.  He wanted $5 for the box.  It seemed like a decent enough deal, but what the heck would I have done with a few hundred box bottom cards? 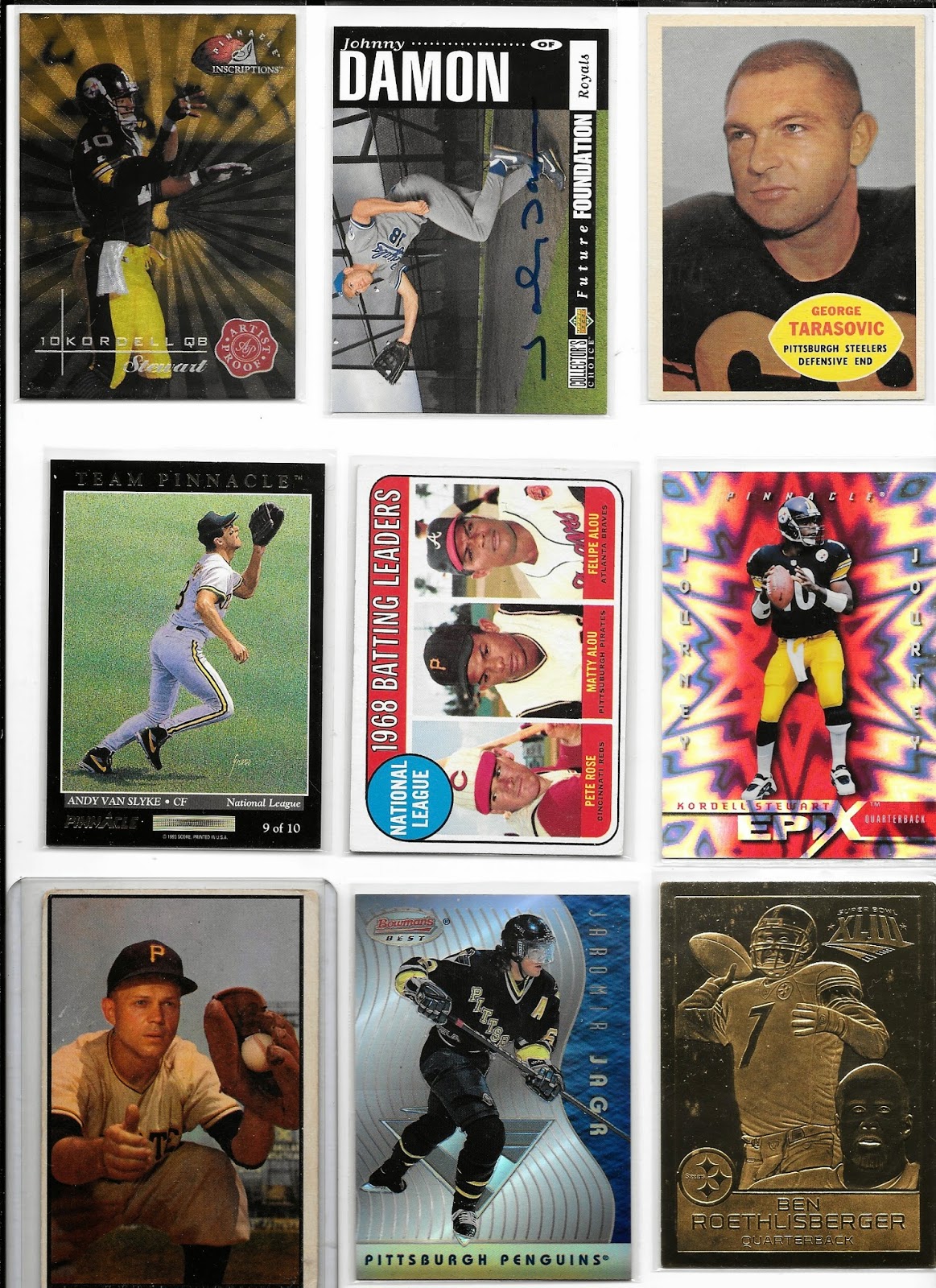 At long last I came across a dealer with some cards!  The guy had mostly dvd's, but said he had recently bought a collection but didn't have time to price it out, so everything was $1. 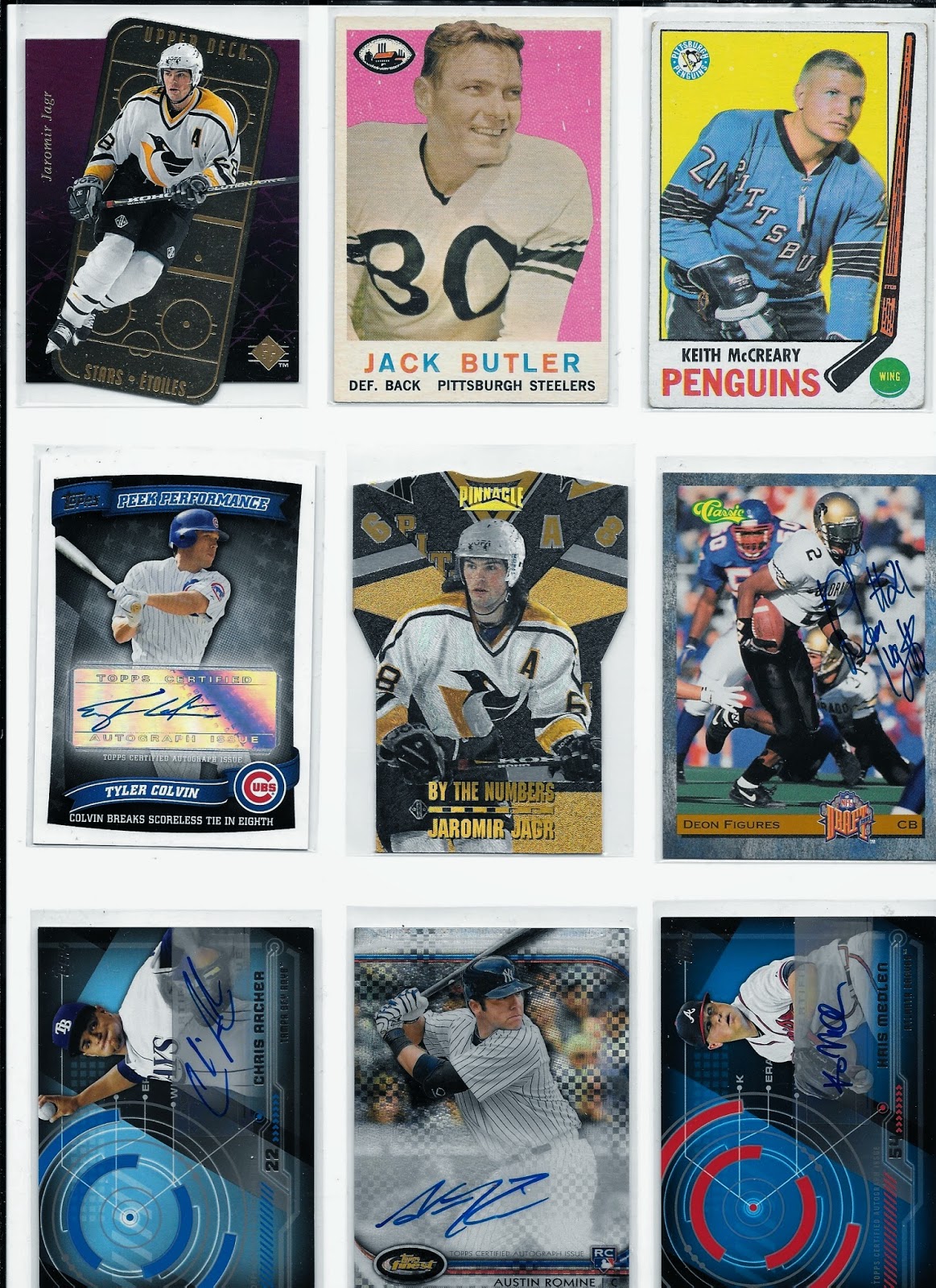 While a good chunk of the two monster boxes he had were things like early 90's Broder foil cards, I was able to pick out a few nice cards.  I left behind some very sharp '59 Topps cards that I probably should have bought.  You can't go wrong with $1 autos from recent products.  The Jagr insert in the top left corner of the second scan is apparently a gold version, and completed auctions of other players from the set seem to fall in the $15-25 range.  Any hockey folks out there who can tell me whats so special about it?  SP was a high end product, but the odds were something like 1:50, which isn't astronomical.  The other die cut card in the center of the scan is one of my new favorites in my small Pens collection. 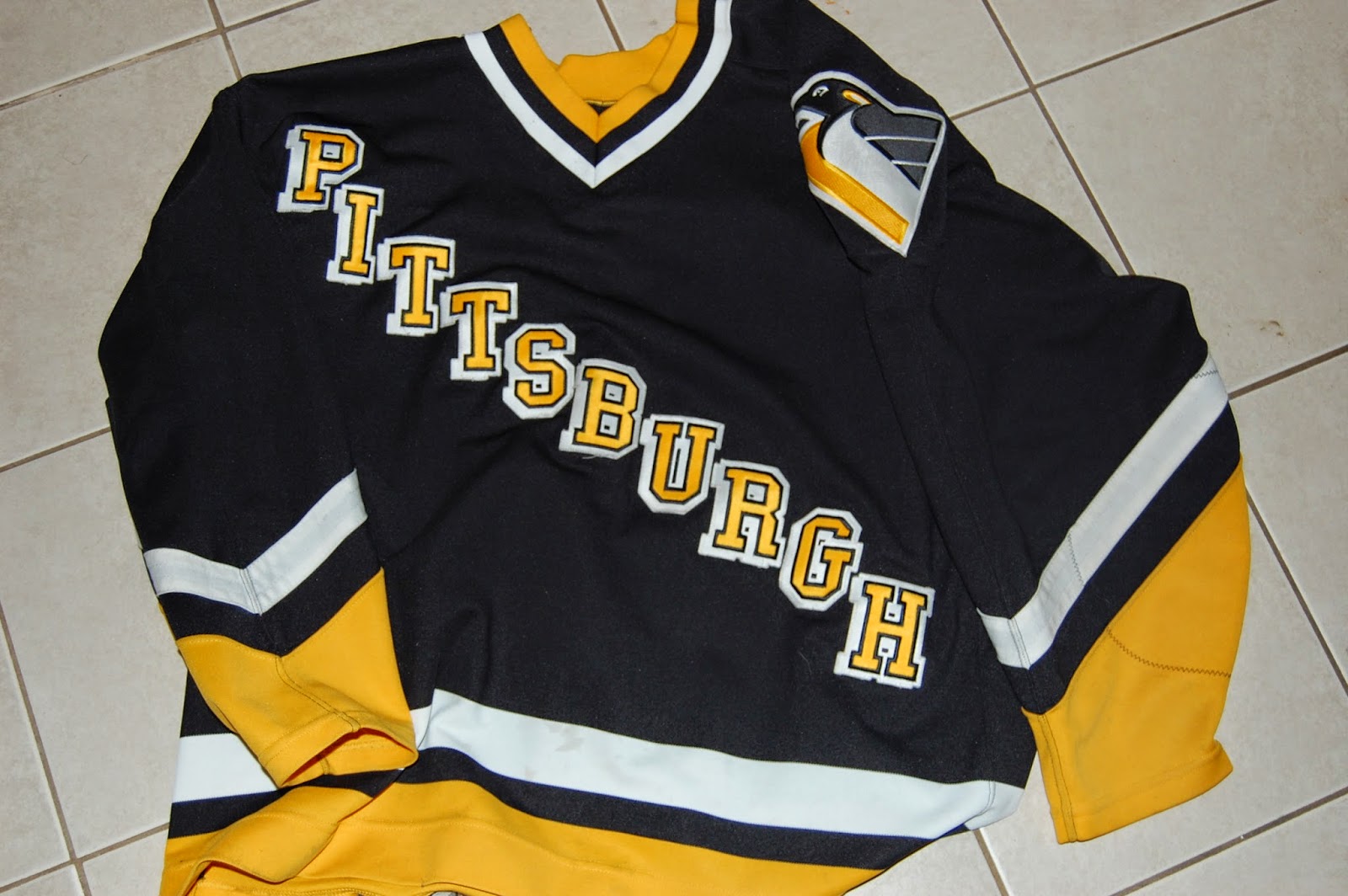 I almost let this one get away, but it ended up making my day.  I spotted the jersey on the edge of a table, but after holding it up it looked like it might be a little too short for me.  The size tag had faded, and I started walking away.  I got about 10 steps before having second thoughts.  I love the diagonal Pittsburgh font, and have been looking for one of these jerseys for quite a while.  Might as well at least try it on, right?  I walked back to the table, and asked the guy what his price was.  He said $10.  Hell, for that much I could probably resell it without any trouble.

I tried it on, and the jersey was a perfect fit.  Shows what I know about clothes.  I couldn't pull that money out of my pocket fast enough.  The Pens had some pretty nice jerseys in the 90's, and I've always been a big fan of nice road jerseys that feature the city name.  This was a huge pickup for me, and came at a great price.  I have no doubt on a busier day this jersey would have been long gone before I ever saw it. 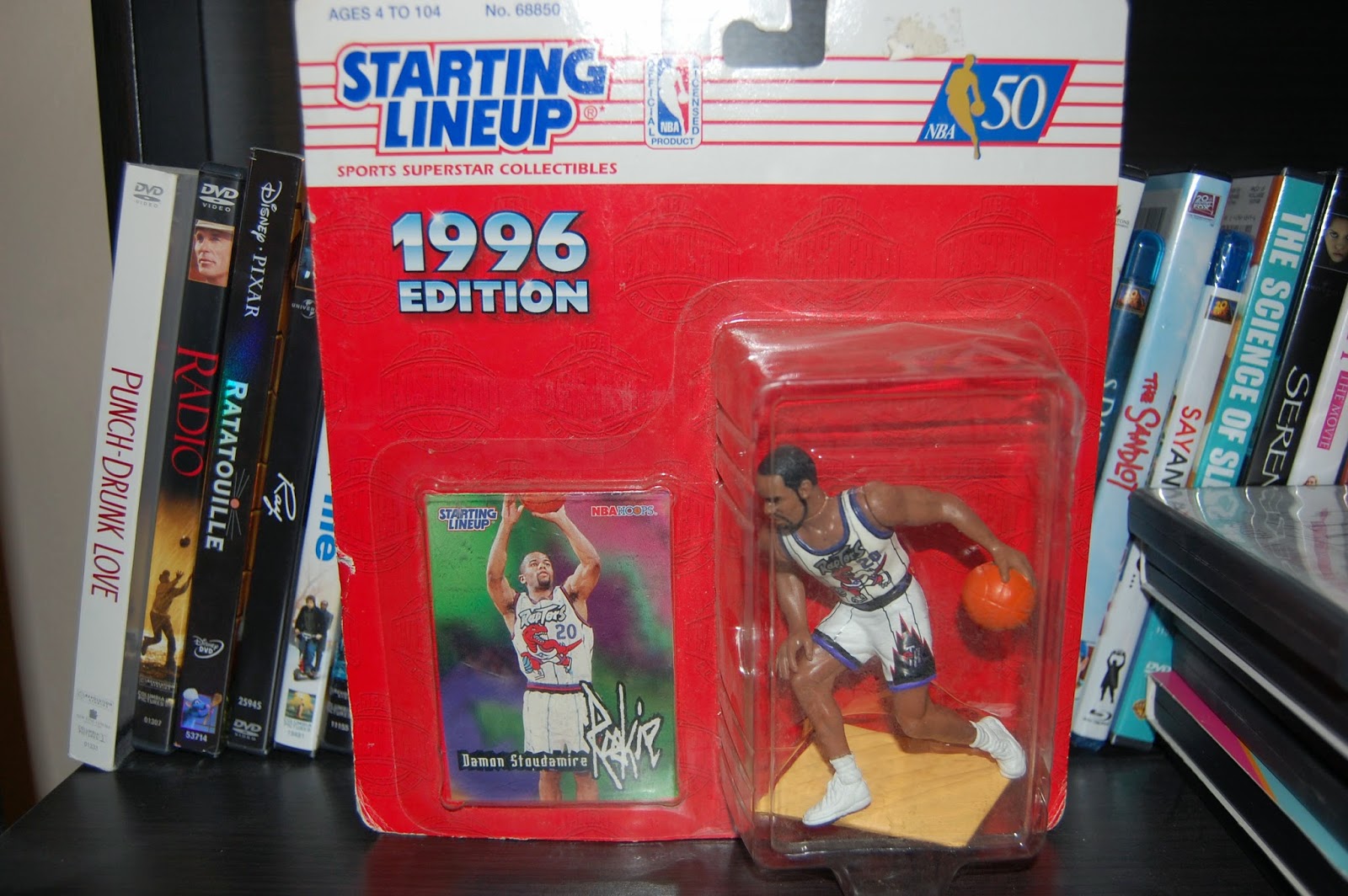 I'm ready to admit I may be starting to develop a little problem with collecting SLU's of my youth.  I have a box or two in storage at my parents of SLU's from the last year or two.  I have absolutely no idea what I can do with them - they aren't nearly as nice as McFarlane's for displaying, are kind of bulky in the packaging, and frankly get really freaking dusty.

But I couldn't pass this one up.  My mom bought this SLU for me for Christmas one year (96? 97?) from the local card shop in the mall.  I'm sure she overpaid.  It was my favorite at the time, thanks in large part to the Raptors ridiculous uniform.  But silly Mark forgot to clean up his toys one day, and our puppy turned Stoudamire into a little afternoon chew toy.  She base was mangled and his head was chewed clean off.  We had to put Snowball down two years ago, and the mangled Stoudamire is still sitting in one of the popcorn tins that house my SLU collection at my parents'.

I was beyond excited when I saw this in a $1 bin of other SLU's at one of the indoor sports vendors, mostly selling Chinese knockoff jerseys for $50.  And the guy looked equally surprised to make a sale.  Kate didn't really get why I was so excited about a toy that wasn't even a Pittsburgh figure.  But the wave of nostalgia, good and bad, that came with this figure was more than worth the dollar.