I Hit a Home Run

I think anyone who starts reading my blog can probably figure out what type of collector I am within a half dozen posts.  I can't imagine I go much longer than that without gushing over a base card, talking about my love for 90's cardboard, or showing off some card that isn't worth more than $2 like it's my prized possession.  It's just who I am as a collector.

Though I've largely sworn off wax since 2006, I ended up splurging on a couple order from D&A during the various sales they had running around Black Friday.  A few boxes I busted when they came in, and a few I saved as an X-Mas gift to myself.  I didn't post any break recaps partially because life got kind of crazy after the holidays, but frankly because the boxes didn't deliver much to be excited about.

I broke a hobby box of 2013 Pinnacle, a product that had me jumping for joy when it came out.  The boxes had fallen to $40, and upon cracking it open I realized why.  While the box had some great 90's nostalgia to some of the inserts, it was overall underwhelming.  With two packs remaining, the best card I had pulled was a David Lough auto that would later evolve into one of my favorite custom cards.

The next to last pack delivered my other auto - a Kirk Nieuwewfdbtehergdfhergsdsae auto.  He has a cool name, and I enjoyed seeing him play on a few occasions.  But make the box it did not. 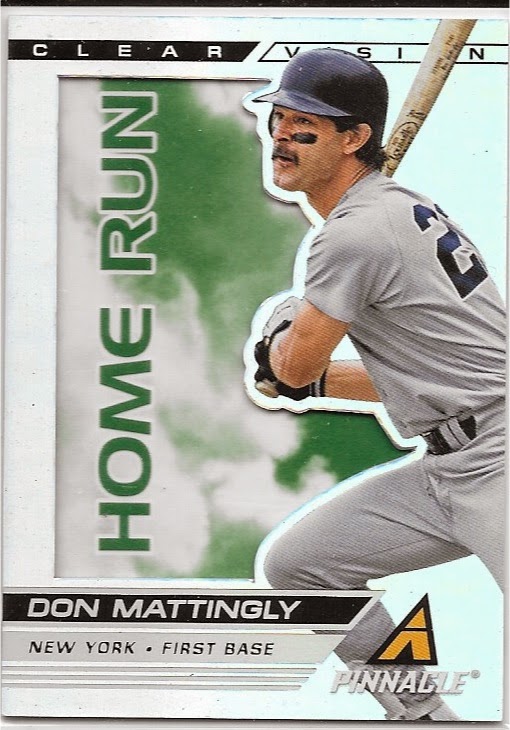 The last pack yielded a Clear Visions Home Run insert of Don Mattingly.  I was momentarily relieved.  I knew the Clear Vision HR cards were rare - I missed out on the only McCutchen that surfaced, and I knew a George Brett sold for good money.  But I was admittedly bummed it wasn't a player I had any interest in, since the set was loaded with 90's stars.  Into the pile of inserts from the box it went, which got boxed up later that day with the rest of my Christmas day breaks.

And then it sat for a while.  Like I said - life.  I started digging out some cards to put up on ebay during the 1,000 free listings promo a month back, and figured the Mattingly would be worth tossing up and seeing if anyone bit.  Worst case I could always put it in one of my binders - it is a cool looking, rare card after all.  Best case, maybe I cover the cost of the box.  The cards are rare, but not numbered.  The set had some glorious 90's nostalgia, but tanked as a whole.  My hopes weren't high.

But I put the card up with an insanely high BIN.  I knew the Brett sold for about $115, which made some hobby headlines.  Estimated print runs have been anywhere between 3-10 copies, but with so much product sitting unopened who really knows.  I figured maybe, just maybe, somewhere out there was some Yankees fan who had way too much money in their bank account, and could appreciate the scarcity of this card.  But it seemed like it needed to be a perfect storm.

After all, I admittedly know next to nothing about cards that push beyond about $20 in sale value.  I can rattle off every junk insert set from the 90's.  I have a mental rolodex of card designs and years for just about every mainstream release or oddball dating back 30 years.  But I'm a low end guy.  The penny stock fan of cardboard.  I have paid north of $50 for a card on maybe 2 occasions in my life.

The lesson isn't about turning a profit.  Or making a buck off busting boxes.  Or even generally selling cards.  The hobby can be so incredibly diverse, and its sales so fickle.  There are certainly some collectors out there who wouldn't have paid $5 for this card, since it wasn't numbered, or signed, and or have a swatch of wood or cloth.  Had it been a different player, someone I had the slightest connection to or affection for, the card undoubtedly would have been put in one of my team binders never to be available.  Every time I search, fingers crossed to find some obscure Jack Wilson card that the rest of the hobby would consider worthless but I consider one of my missing crown jewels, I wonder if there's a similar story.  Some guy who held onto the card because it looked cool, or some young kid who pulled it at age 11, and then lost interest in collecting when he found girls and a drivers' license - the cards now sitting in some box or binder in his parents garage.  Money aside, it's kind of nice to know that the card is now stashed away in the collection of a big time Mattingly collector, someone who unquestionably will appreciate the card more than I ever could.  But daaaaaaamn that scan does look nice.