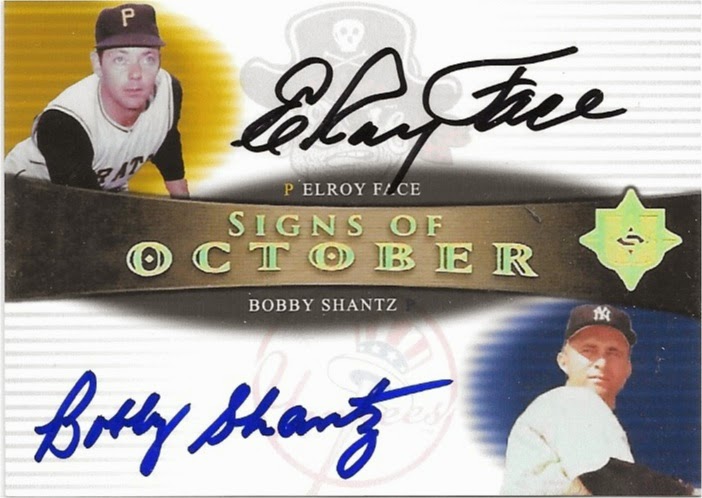 If you asked me to pick the favorite card in my collection, I'd have a tough time giving you an answer.  After all, which collection?  Pirates? Penguins?  WVU?  Kordell Stewart?  Jack Wilson?

But for today at least, I have a new contender for the crown.  And it's not even a real card.
The 2005 Upper Deck Ultimate Signatures set pairs some of the greatest names in baseball history, and is, in my opinion, one of the most beautiful autographed sets ever made.  But it's lacking a bit on the Pirates.

So I decided to see what my custom skills could whip up.  And I have to say I'm pretty happy with the result.  So while these players aren't getting any younger, I decided to whip up some customs commemorating the Pirates' World Series matchups.

Elroy Face and Bobby Shantz were the only players to record a save during the 1960 World Series, with Face picking up 3 for the Pirates while Shantz had the Yanks lone save (their wins were largely blowouts).

If I want to nitpick, it would have been nice to have both in blue sharpie.  But I'm not really in a nitpicking mood.  This is a real gem from two great pitchers, and two of the hobby's most gracious signers.

I also sent along a couple other customs for Bobby to sign.  And here's a fun fact that will blow your mind: Bobby Shantz is one of the last players to have played under Connie Mack, playing under for the legendary manager during the 1949 and 1950 seasons.

I could babble on and on.  But I couldn't be happier with how these came out.
Posted by Mark at 3:49 PM