I Get By With A Little Help From My Friends

I'm pretty proud of the Pirates collection I've amassed.  At times collecting can feel overwhelming.  At times I wonder if I might be sliding down a very weird compulsive slope when I realize I checked COMC for new cards twice in a day.  But at the end of the day, I just simply enjoy the cards I've accumulated...even if I am always on the hunt for more.

But that collection isn't simply thanks to some great dime bins and way too much time shopping on the internet.  I've been fortunate enough to come across some really great people while collecting.  Whether it's trades or folks simple sending me a card because they know it would have a good home in my collection, some of my favorite cards are ones that came to me from another collector.

But it comes down to more than just cardboard.  I've met some really great people through collecting.  And right at the top of the list are my group of Team Collector friends.  I know I've been mentioning the group a good bit lately.  I swear this isn't just a cheap plug for our upcoming Heritage/Donruss/Opening Day break, which we still have a few slots open for.  Ok, maybe that was.  It's a genuinely great group of people, who I genuinely consider among my group of friends.  We even try to get together once a year for a Team Collector Convention.  Not bad for a bunch of guys (and a girl) from across the country who started out just trading baseball cards.

So for me, any cards I get from the group hold a little asterisk in my mind, right up there with cards that came as a gift from my parents. 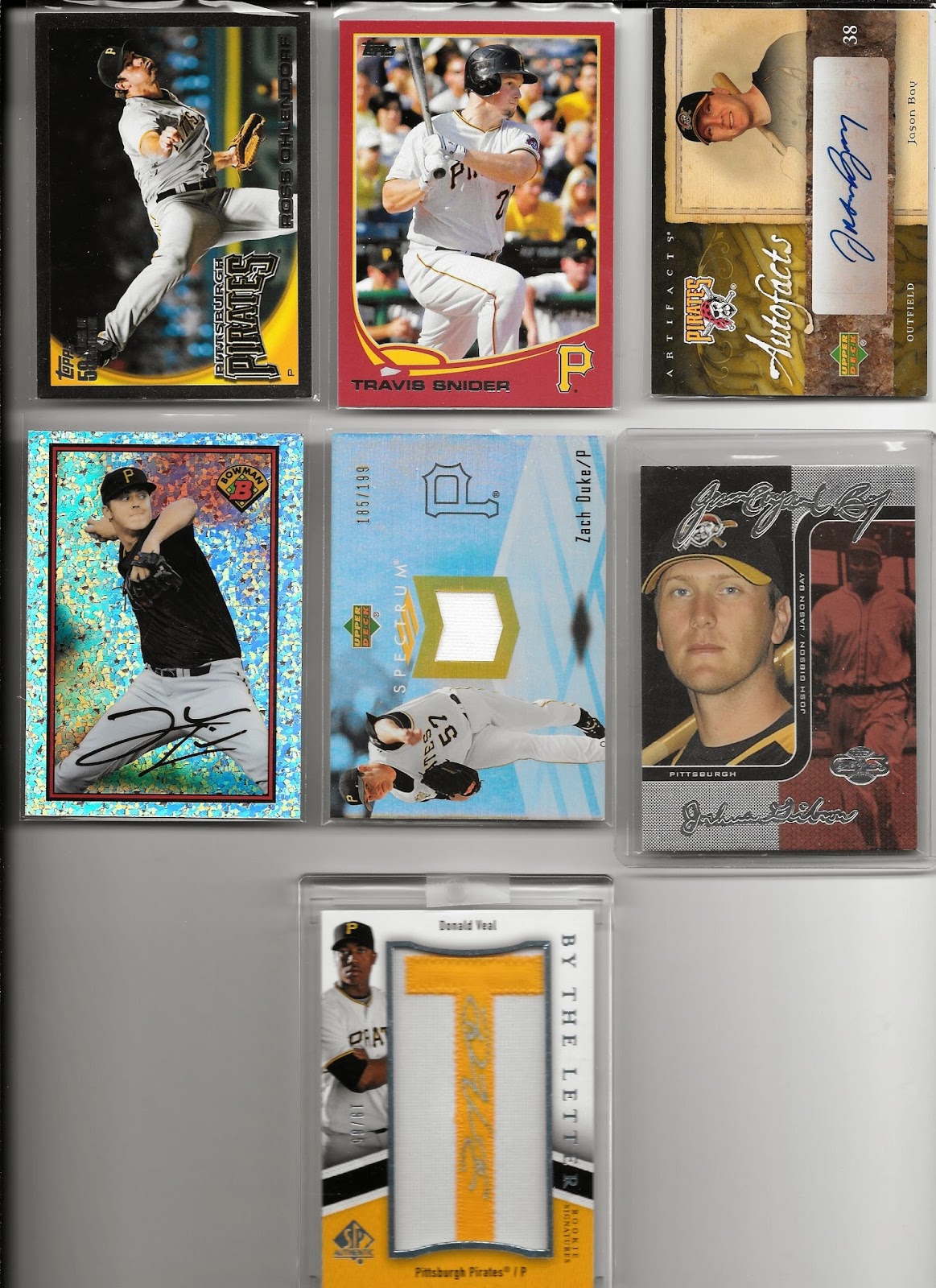 So I was pretty excited when I had a box waiting for me the other day.  See, the way the group works is that there are Tier 1 and Tier 2 collectors.  The Tier 1 guys all trade with each other.  By the time I joined the group, the Pirates had already been claimed, so I got slotted in as a Tier 2.  I round up stuff for the other 29 teams, send it to the Tier 1 Pirates guy who dishes it out among the group, and then sends me his Pirates doubles. 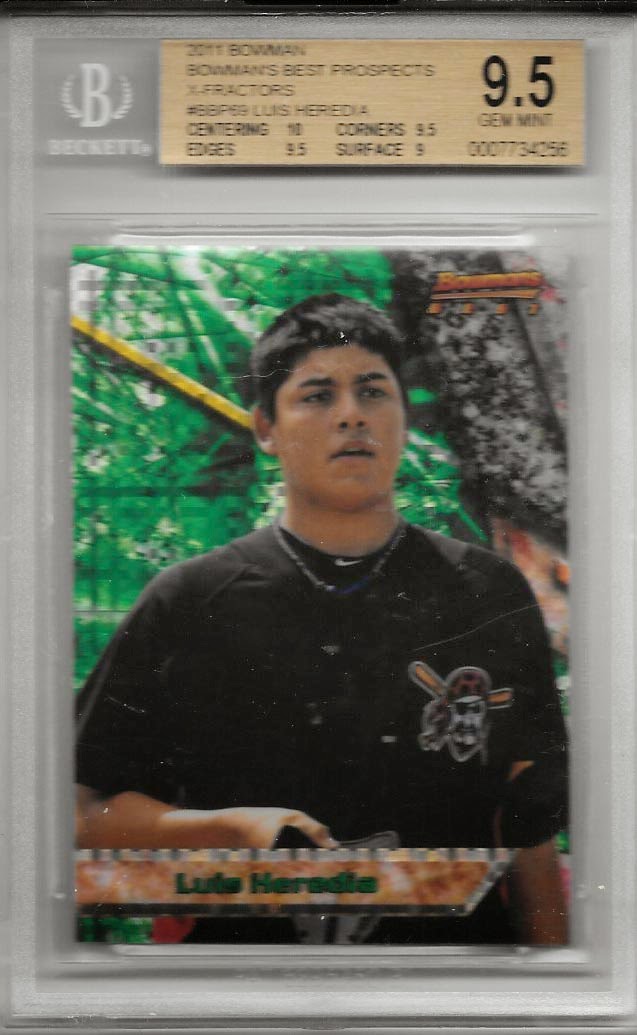 Doubles might not be the right word.  Barry, the Pirates Tier 1 collector, is a great guy.  He has a ton of cards, but I'd guess not alllll of these were doubles.  The package he sent me was absolutely loaded.  The Luis Heredia card is an X-Fractor /25.  It graded well, but I'm tempted to crack it free and slot it into my binder where it belongs. 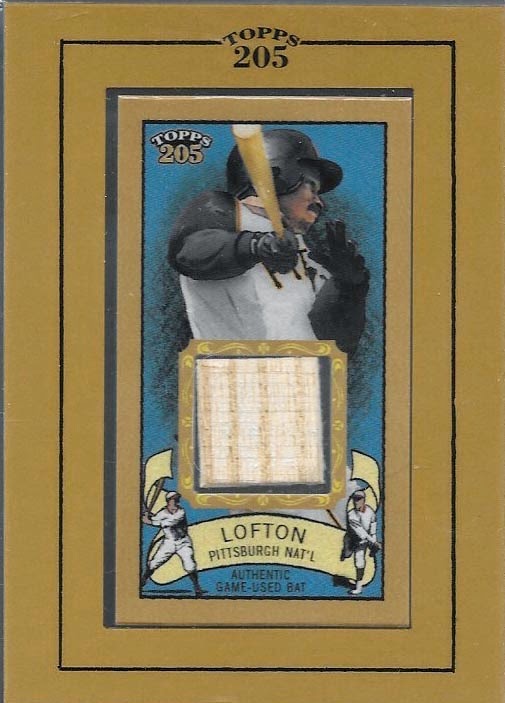 And while Kenny Lofton's stay in Pittsburgh was short, he was really exciting to watch.  While perhaps not the dynamic player that sparked the Cleveland offense a few years earlier, he was still near the top of his game.  And he brought an electricity to PNC Park that I hadn't seen again until the last couple years.  But he has tragic few Pirates cards. 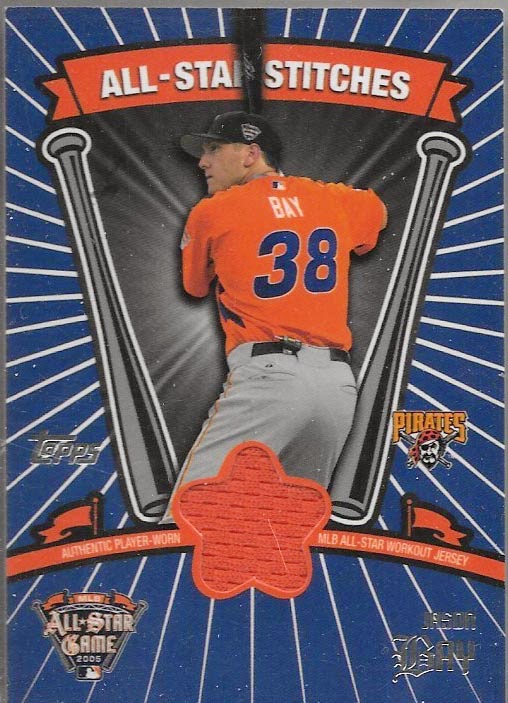 And what package would be complete without some mid 00's Bucco love?  The Pirates haven't fared too well in home run derbies. 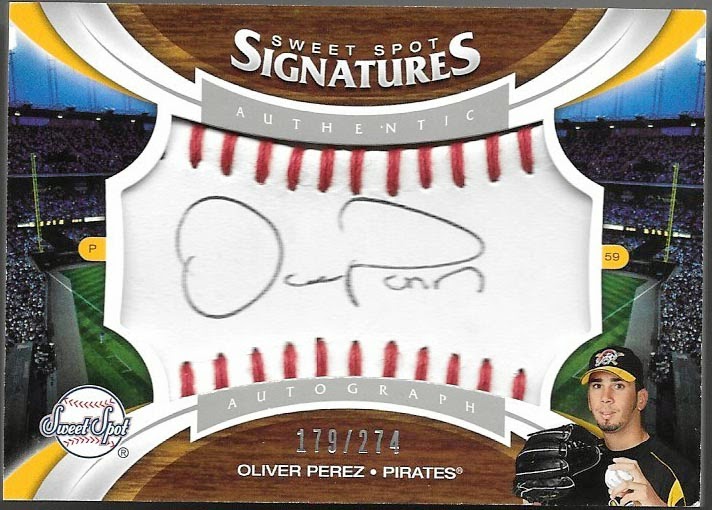 And don't even get me started on Oliver Perez.  Even though his career in Pittsburgh fizzled quickly, he was still one of the more exciting pitchers I've watched between 2004 and 2005.

The cards are great, and welcomed additions to my collection.  But collecting is about more than just the cardboard.  My collection wouldn't be anywhere near where it is without the great folks I've met along the way.  And that's worth way more than the value of some ink, cardboard, and pieces of fabric.
Posted by Mark at 10:33 AM